On this leg we’ll see The Oneonta Gorge, Oneonta Falls and pass through the Oneonta Tunnel. Other attractions include Horsetail Falls, Ainsworth State Park, Elowah Falls, Starvation Creek Rest Area and Trailhead, Bonneville Lock and Dam and The city of Cascade Locks. 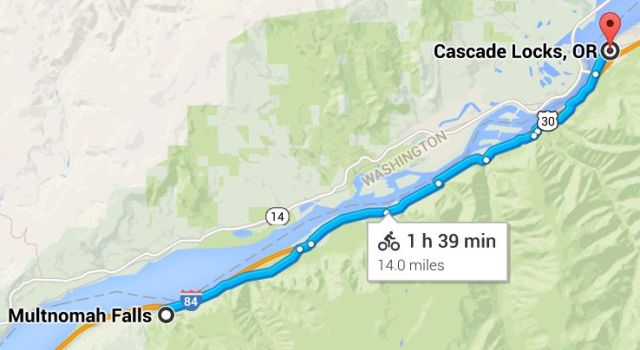 Although Interstate 84 has an exit and parking for visiting Multnomah Falls, the two highways don’t connect at Multnomah Falls. You’ll have to back track a few miles west to get on the Interstate, or continue East on the historic highway with us.

The Oneonta Gorge/Trail is unique, but there is no trail…the river is the trail. You park in the designated areas near the Oneonta Bridge, and walk down to the water on the east side of the bridge. Go on a summer weekday, the water is too cold and high during other seasons.

Lower Oneonta Falls can only be seen by walking upstream from the creek’s outlet at the Historic Columbia River Highway. The upper falls are about 1 mile upstream from the middle falls and require scrambling up the creek or climbing down a canyon wall to view. The fourth falls which is “Triple falls” can be seen from a vantage point on the upper trails in the canyon.

It’s a 1.5 miles round trip to bridge. In recent years funds to unearth the Oneonta Tunnel and make appropriate repairs have restored much of the original tunnel.

For the first time since it was filled with debris in 1948, daylight could be seen through Oneonta Tunnel in August, 2006.. The grand reopening of the tunnel was on March 21, 2009.

Horsetail Falls is easily accessed, in contrast to its near neighbor Oneonta Falls, as it is right next to the Historic Columbia River Highway.

Ainsworth State Park is equal parts waterfall wonderland, hiker’s playground and camper’s delight. The Nesmith Point trail (10.6 miles round trip), will take you to a splendid view of St. Peter’s Dome, a majestic basalt monolith rising 2,000 feet above the mighty Columbia River. This hike starts in the John B Yeon State Park parking lot. This place might be the highest-theft lot in the gorge. Leave your valuable things at home!

Elowah Falls flows year round, but are best in the late winter and spring, like many others in the area. The cliffs on either side of the falls are flanked with the colorful yellow-green lichen. McCord Creek crashes into a huge amphitheater made up of several distinct lava flows. This is a fairly easy hike, appropriate for most beginners. There is a small amount of climbing with a summit in the middle. Consider combining this hike with the Upper McCord Creek Falls Hike. 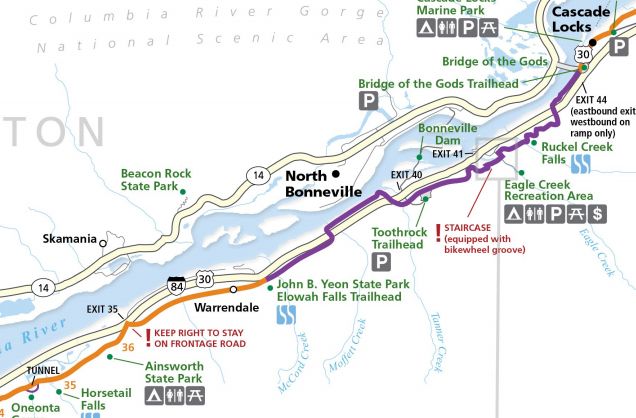 The Pacific Northwest is seismically active with the Juan de Fuca Plate capable of producing megathrust earthquakes. The last one was the 1700 Cascadia earthquake which produced a tsunami in Japan and may have temporarily blocked the Columbia River at this point with the Bonneville Slide. It’s near the Bridge of the Gods on the Washington side. More recent investigations, however, indicate the landslide occurred around 1450, more than two centuries before the great earthquake.

The city of Bonneville is best known as the site of Bonneville Dam, the last major dam on the Columbia. Take exit 40 to check it out. Prior to this damming of the river, the Cascade Locks and Canal were constructed, allowing ships to pass the Cascades Rapids, located several miles upstream of Bonneville.

The dam’s two powerhouses can generate over a gigawatt of power. The electricity is distributed by the Bonneville Power Administration.

Bonneville Lock and Dam is located 145 river miles from the mouth of the Columbia River and about 40 miles east of Portland, just west of Cascade Locks.

Check out the visitor’s center where you can see Bonneville’s generators operating. The nearby Bonneville fish hatchery also has an informative visitors center with a self-guided trail around the facility.

The city of Cascade Locks took its name from a set of locks built to improve navigation past the Rapids. The city is located just upstream from the Bridge of the Gods, which spans the Columbia River.

Cascade Locks is used frequently by hikers along the Pacific Crest Trail (PCT) to cross the Columbia River.

Cascade Locks is the lowest point along the trail, which runs from the Mexican border in California to the Canadian border in Washington.

PTC is 2,663 mi (4,286 km) long and ranges in elevation from just above sea level at the Oregon–Washington border to 13,153 feet in the Sierra Nevadas. Cheryl Strayed wrote Wild: From Lost to Found on the Pacific Crest Trail a best seller about her experiences on the trail.

NEXT: Cascade Locks to Hood River